No list of famous or influential women would be complete without an homage to Eleanor Roosevelt, First Lady of President Franklin Delano Roosevelt. Eleanor Roosevelt was a remarkable woman who led a remarkable life. Born in 1884, Eleanor was educated in Europe and returned to America to be a debutante. She married her fifth cousin, Franklin Delano Roosevelt, in 1905; at the wedding, she was given away by then-President Theodore Roosevelt. She had six children before FDR came down with polio in 1920, and she tended to him while he recovered and encouraged him to pursue his political ambitions despite his illness. It was during this time that she began her own political involvement, joining the League of Women Voters, serving as Vice President of Legislative Affairs!

FDR was inaugurated in 1933, and while he conducted a landmark Presidency, Eleanor transformed the role of First Lady. She became a visible public figure, travelling the country and writing a daily syndicated newspaper column. For the first time, the First Lady held her own press conference. In true Eleanor Roosevelt style, she only allowed female reporters to attend. As First Lady, she was actively involved in New Deal efforts, travelling to work sites and living locations for the relief efforts. She became a fierce advocate for the poor and disadvantaged.

After her husband’s death and a brief recusal from public life, Eleanor was appointed by President Truman to the US delegation to the United Nations. There, she served on the Human Rights Commission and helped author the Universal Declaration of Human Rights. The UDHR was adopted and is still used regularly in international law today. Eleanor developed a strong relationship with President Kennedy, who reappointed her to the UN. He also appointed her to the National Advisory Committee of the Peace Corps and as Chair of the President’s Commission on the Status of Women.

Eleanor Roosevelt remained active in public life and humanitarian causes until shortly before her death in 1962.

Many tout the Kennedy Administration for transforming the Presidency, turning the office into a public affair with images of the First Family living an “ordinary” life in the White House. I contend, however, that this change could not have happened if Eleanor Roosevelt had not first transformed the office of the First Lady. She was not only an ardent supporter of the work her husband did, but also conducted herself independently as First Lady, championing her own causes and performing her own citizen outreach. Since Eleanor Roosevelt took on the causes of the poor, disadvantaged, and human rights, First Ladies Nancy Reagan took on drug abuse, Hillary Clinton took on health care, and Michelle Obama is promoting healthy nutrition and exercise choices for children and families.

We have much to thank Eleanor Roosevelt for, and today we honor her. May we all attempt to live out her legacy; after all, “No one can make you feel inferior without your consent”!

The Libby Sharpe Memorial Fund, established by Irwin Sharpe to honor his late wife, has made it possible for the League of Women Voters of New Jersey to continue doing the work that she valued most—training members to become leaders in the League; in the workplace; and in elected and appointed office.  The training materials she developed, and which were donated to LWVUS, were incorporated into the 2005 publication, “Citizens Building Communities: the ABC’s of Public Dialog.”

Libby Sharpe was brilliant, vivacious, hard working, and passionate about good government. When she spoke at a celebration of the League’s 75th birthday in 1995, at which she was honored for 50 years of community service, she described the League as “patient and tenacious.” She certainly was.

Entering Hunter College at 14, she received a B.A. at 18, and earned an M.A. from the University of Chicago, studying sociology, political science, and economics.  Fresh out of school and attracted to the League by its role in changing the Federal Civil Service from a spoils system to one of merit appointments, she joined the Central Queens Branch of the League in 1944.

In the late 40’s she worked on local political reform in New York, helping expose the inefficiency and corruption of its yearly voter registration system. She was assigned to the Hell’s Kitchen area, where she investigated voter lists, finding that many names were listed as living in non-existent buildings or were people who had moved or died.

When she moved to West Orange in 1950, she immediately joined the League there where she held many positions, including the presidency, and remained active until her death. She worked as an educator and activist on many critical local issues. Among them was the form of West Orange’s government. The effort she and other League members began in 1957, first studying then advocating for a change from a Commission form to Mayor-Council form, was finally accomplished in 1968.

She also led the formation of the West Orange Campaign Ethics Committee and the establishment of a Code of Ethics that candidates for Council and the Mayoralty pledged (in front of a judge) to abide by, including campaign spending. This brought big changes in the tenor of local campaigns, which continues today.

She actively supported the United Nations and helped educate local citizens and political representatives in the 1950’s about the importance of international trade as a way to encourage global peace and help New Jersey develop.  She helped organize a League survey of 419 manufacturing firms in the 10th, 11th and 12th Congressional Districts to analyze the importance of foreign trade on jobs and growth in the State.

She also persuaded her League and PTA to join forces in raising money for UNICEF (the U.N. International Children’s Emergency Fund). They converted half pint milk containers in school cafeterias into collection boxes to help children in war-torn Europe, an effort that preceded the ubiquitous orange “Trick-or-Treat for UNICEF” boxes that many children around the country carried on Halloween for years.

After serving on the West Orange Citizens Charter Association during the effort to change the charter in the 60’s, Libby worked with the League to establish a town Department of Planning headed by a capable, certified professional planner.  She then served on the West Orange Citizens Advisory Committee and later on the Zoning Board of Adjustment from 1977-1985, working closely with the first town planners hired.

Libby worked as a marketing manager and as office administrator for the family’s consulting firm; and her involvement in the League and her community was a second, unpaid full-time job, her family being the first. She was a devoted wife to Irwin and raised four children—Kenneth, Bonnie, Peter, and Debbie—and eventually had four grandchildren. All were shaped by her involvement in civic affairs. 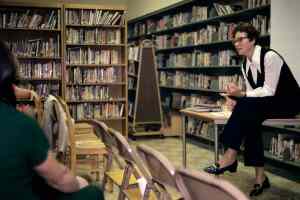 Libby rarely took the limelight in reform efforts.  She usually worked behind the scenes, working the telephones, mobilizing others, quietly convincing public officials of the soundness and decency of her arguments, and above all educating and training others to be leaders.  She often said that her proudest accomplishment was training women to be leaders in the League and watching them go on to hold elective and appointive public office and become leaders in other volunteer organizations and professions.

Libby’s lifetime of League and civic achievements serve as a model for all. Her selfless devotion to civic improvement encapsulates the best of the League of Women Voters and her memorial fund further extends her work for civil dialog and good government. The League is wholeheartedly grateful for both her service and the opportunity to continue her good work through this Fund.

Please consider visiting www.lwvnj.org or mailing a check to 204 West State Street, Trenton, NJ 08608 to give a gift honoring Libby or any other person who has contributed much to the work of the League.

Have You Seen Human Trafficking In Your Town?

The following is written by Elizabeth Santeramo, League of Women Voters of New Jersey board member and chair of the League’s Women and Family Issues Committee.

January has been declared “Human Trafficking Awareness and Prevention Month” by President Obama. As a member of the League of Women Voters of New Jersey, I have had the privilege to attend a United Nations briefing on Human Trafficking where a former sex slave bravely shared her story. The devastating crime of human trafficking occurs in New Jersey’s urban areas and in the quaint small towns that pepper the state. The League of Women Voters supports human rights, and condemns all forms of slavery and the violence associated with it. We believe that the basic inalienable rights granted at birth must be protected and upheld.

Many of the massage parlors that line our Main Streets are storefronts for sex shops-harbingers of terror and abuse where trafficked women and girls are forced to perform sexual acts on patrons. Often, the victims live where they work, in dark and filthy conditions. They are not allowed to leave, take breaks, or do the routine things you and I do, like shop, visit a friend, or take a walk in the park. They are truly sex slaves.

It is odd to use the term “slave” in 2012. Yet, these victims are transported to our local towns from Newark, where they are trafficked from Brazil and parts of Asia. This is modern day slavery. Some of these victims are as young as 8 years old. In most cases, community members do not complain about the massage parlors because they are unaware of what lies behind the doors, and the establishment does not constitute a nuisance. Many may think it’s a typical “happy ending spa” but few realize that we are dealing with real women and girls who have been abducted from their homeland and tricked into thinking they will live the American dream. But we know better. They are living an American nightmare.

As a League member, I was invited to attend other briefings at the U.N. where I heard a survivor share her story of being sold at 16 in her home state of California. She was walking with her sister one day, when another woman and fellow Mexican-American approached her with a job opportunity to clean homes. In need of money, she accepted. After a long car ride, she was taken to a small dark room where she was chained and drugged. Her job turned out to be that of a sex slave for an older married Mexican man. After years of psychological, emotional and physical torture, she now shares her story to help other victims and make citizens aware of how to spot trafficking activity.

I viewed a slideshow presented by an attorney who works at Sanctuary for Families in NYC. The program showed the three key things to look for to help identify makeshift massage parlors: obscure establishment names, i.e. a number and a name; windows discreetly veiled with curtains or blinds to hide the interior from outside; and the inability for potential customers to book an appointment if they are not the “right” type of client for the parlor.

If you have come across such parlors that offer “massages” and you’re suspicious that they may hold victims of human trafficking, there are ways that you can help. You can save a woman or a young girl by learning how to identify trafficking in your neighborhood, how to help a victim, and how to report it anonymously. The League of Women Voters of New Jersey partners with Polaris Project to help prevent these crimes. Polaris Project provides a hotline for the public to anonymously report suspicions and the League of Women Voters of New Jersey is looking for members who are interested in working to stop human trafficking in our state. For more information, please visit www.lwvnj.org and www.polarisproject.org.