This is a guest post written by former LWVNJ intern, Christine Kaufman.

Voting is an untouchable privilege to millions of people around the world.  Just this year Egyptians finally got to vote in a presidential election that did not already have a clear cut winner.  70 year old Nadia Fahmy lined up with fellow Egyptian citizens, some who waited four hours, so she could vote for the first time in her life. Although some debate the fairness of our elections in the U.S., we are quite blessed to have the right to vote.  Americans spend so much time dwelling on what we do not have and forget to utilize the rights we were born with.

This is the first year I will be old enough to vote in a presidential election.  Unfortunately, I was born a few months late and was only 17 during the 2008 election.  In 2010, only 55.6% of eligible NJ citizens were registered to vote. Could it be that almost half of our population does not see the importance in voting?  Some of my friends would see that number and agree, everyone only has one vote and that one vote will not make much of a difference.  But what if everyone took their vote seriously?  If all of those non-believers came together and voted, they could easily change the outcome of any election.

I vote because I believe you cannot just sit back and complain about the government if you do not attempt to influence it.  I vote because this is the first year my younger brother is old enough to vote and I want to set a good example.  I vote because my father spends hours upon hours educating himself on current events since he takes his vote seriously.  I vote because my mother votes and because her mother had to earn the right to vote.  So let us all start taking our votes seriously.  Visit our website for more information on voting and how you can register to vote.

The following post is written by LWVNJ President Toni Zimmer. 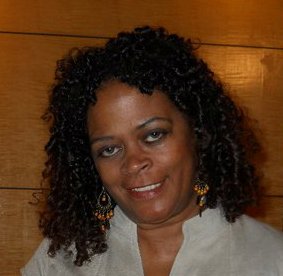 It’s hard to imagine the emotions that must have surged through the hearts of American women back on August 26, 1920 – the day they received the right to vote through passage of the 19th Amendment. It may be impossible to replicate those feelings, but what I can do is take you on a virtual trip back in time, to describe how the historic day unfolded in Washington, changed the future for all of us, and where we find ourselves today.

The fate of the 19th Amendment was decided by a single vote, by 24-year-old legislator Harry Burn, of Tennessee, who switched from “no” to “yes” in response to a letter from his mother saying, “Hurrah, and vote for suffrage!” The Secretary of State in Washington, DC issued the 19th Amendment’s proclamation immediately, well before breakfast on August 26, 1920, in order to head off any final obstructionism. 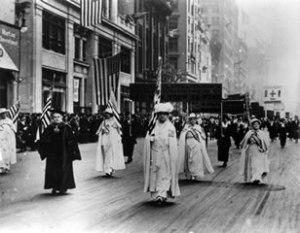 Did women kick up their heels and dance in the streets when they heard the news? I really don’t know, but they certainly deserved to. Our country had taken a tremendous step forward that could not have been accomplished without the decades of hard work, courage and planning put forth by woman suffrage movement leaders and supporters. 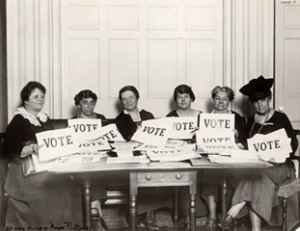 A couple of years before that historic day, leaders of the suffrage movement began to carefully plan for it. They realized that winning the right to vote would be just the beginning of full citizenship for women. As new voters, women would have to be taught the fundamental elements of voting, including how and where to register and vote, how to interpret ballot issues, and how to assess candidates. They would also need to be informed and educated on an array of relevant issues to cast their votes effectively and with conviction.  And so, the League of Women Voters was conceptualized, ready and waiting in the wings to step forward on that incredible day as the official organization to help women make the historic transition into the world of the informed voter. 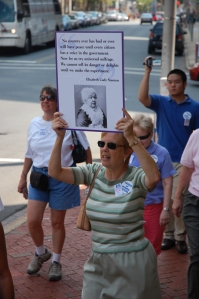 We are proud and grateful for the efforts of the strong and principled women who sacrificed and fought for so many years to bring equality to all women by standing up and insisting upon the passage of the 19th Amendment.  We believe that a secure future depends on citizens learning about the issues, speaking out, and seeking positive solutions to the problems confronting our communities and our country.

Of course, there is still lots of work to be done, but before we continue on, we should take some time off to celebrate Women’s Equality Day, as many celebrated this day back in 1920.  I hope they danced.